The Amsterdam General Strike of February 1941 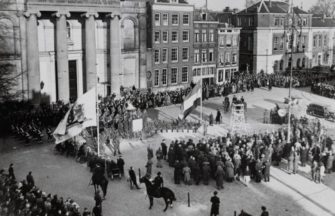 In February 1941, a great general strike transpired in the streets of Amsterdam. This strike was organized by non-jews living in Amsterdam to protest the Nazi treatment of Jews. The end result of the strike was not enough to halt the atrocities of Nazis to the Jews of Amsterdam. Nevertheless, it stands as a positive and powerful moment in the history of the holocaust in Western Europe.

If you’re interested in learning more about our Jewish history, consider joining Jewish heritage tours at kosher riverboat cruises. Travel in style, experience kosher cuisine, get in touch with our identity as Jews. Spend your Jewish vacation with us and book a trip soon!

The Invasion of the Nazis in Amsterdam

The city of Amsterdam is known for its liberal ideals, general policy of tolerance, and civic freedom. Unfortunately, this came to an end when the Nazis invaded Amsterdam and removed all the Jews from their various civil service professions.

In response, the Jews protested against this. There was physical violence during the movement and it was overall incredibly savage and brutal. As a result, a lot of Jews lost their lives throughout the fight as the Nazis seized 425 Jewish men and deported them to Mauthausen where they would then be killed.

A day after the upsurge of violence in Amsterdam, workers got together with the leadership of the communist party of the Netherlands and proclaimed a general strike. The movement was successful in terms of participation as there were a lot of workers from a range of different fields that banded together to fight for the Jewish people in Amsterdam. An estimate of 300,000 workers played a part in this movement, with their symbol being the dock workers. It is considered the largest single public demonstration by non-jews in support of and solidarity with the Jewish community in Amsterdam.

Sadly, the movement was not able to succeed and was forcibly put to an end by the Nazis. The general strike of February 1941 serves as a unique moment in the history of Amsterdam. Thus, every 25th of February, the people of Amsterdam commemorate this great piece of history and gather around a statue that was put together in 1952 after the war to remember the moment. The statue is called “The dockworker” by the Dutch sculptor, Mari Andriessen.