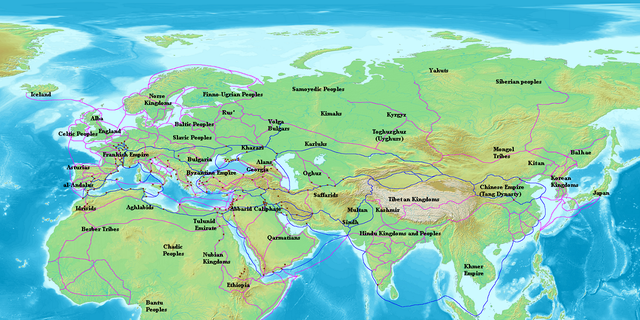 Map of Eurasia showing the trade network of the Radhanites (in blue), c. 870 AD, as reported in the account of Ibn Khordadbeh in the Book of Roads and Kingdoms; other trade routes of the period are shown in purple. | (c) en.wikipedia.org/wiki/Radhanite

The Radhanites are a group of people in our history that were recorded in several accounts of Arab geographers, particularly of Ibn Khordadbeh. In the 9th century, Ibn Khordadbeh had described a group of Jewish travelers that he called The Radhanites. The term came from “the Rhone River,“ which translates to “Rhodanus” in Latin. Though many other scholars have different claims when it comes to the origin of the word “Rhadanite.”

If you’re interested in learning more about our Jewish history, consider joining us on our Jewish heritage tours. Travel in style, meet unfamiliar faces, eat unique kosher food, and get in touch with your Jewish background. Spend your Jewish vacation with us at Kosher Riverboat Cruises! Book a trip with us soon.

Early Accounts of The Radhanites

According to Arab geographers, the Radhanites spanned the globe with their commerce. They’ve covered Europe, Central Asia, North Africa, The Middle East, and some parts of China and India. This was even before Marco Polo and other explorers made it there. The natural consequence of having a far flung diaspora of Jews. With Jewish communities scattered all over these trade routes made it incredibly easier for Jews to travel.

Ibn Khordadbeh shares that these groups of Jewish travelers were multilingual. He lists the languages that they spoke as Arabic, Persian, Greek, French, Old French, Spanish, and Slavonic. This may have been just a few languages that were mentioned as the group would have had to know a lot of other languages since they’ve traveled to so many parts of the world for trade and business.

The Radhanites as Merchants and Traders

The Radhanites sold products during the early spice trade like musk perfume, aloe, camfour, and cinnamon from the East. Other than this, they were also known to sell all kinds of goods like silk and jewelry. From the west, they brought beaver and marten fur, as well as manufactured steel weapons like swords.

The Radhanites were known to be involved in all kinds of trade, even slavery. The Radhanites traded white pagan slaves since they were the ones with high demand among the east. Female white slaves were also desired and were even taught how to sing and were given a small amount of education in order to entertain their owners. They sold slaves to incredibly wealthy people during their time.