Úštěk: A Small But Valuable Treasure 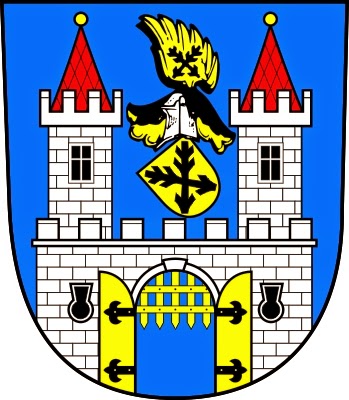 Úštěk, known as Auscha in German and אושה Oyshe in Yiddish, is a small, medieval market town in Northern Bohemia. It is found 10 miles from the regional center of Litoměřice, about 55 miles north from Prague, and around 70 miles south of Dresden.

It consists of a small historical core, two suburbs and 21 local districts. The town is crossed by road No. 15 and railway line No. 087 connecting Litoměřice with Česká Lípa. There are less than three thousand inhabitants in this small town. A sleepy looking town indeed.

The picturesque town is situated on a distinctive sandstone hill at a mild altitude of about 780 feet. It is at the border between the Central Bohemian Highlands and the Kokořínsko regions, on an old medieval road that once connected Bohemia with Saxony. The most valuable part of the city is the preserved late Gothic burgher houses at the town square, declared as protected national heritages by the state.

The beauty of Úštěk is a reason why it is used as a backdrop for films. In the vicinity of the town is a beautiful landscape with several natural reservations. North of the town is a large pond called Chmelař, meaning Hops. Hops is the typical crop for this region. Miles of hops plantations mark the local hilly, green and wild–but very fertile landscape.

Hops, yeast and the result of its mixture – beer – is undoubtedly the major produce of this area. It is not known when beer was first brewed here, but some historians claim that this very region has been brewing beer since antiquity. Celtic tribes residing here around 4th century BCE were known to drink it. First historical sources can be dated back to 11th century, and since then, the area of Northern Bohemia has been notorious for its many breweries.

The region boasts one of the finest European beers, just like the French regions are known for its Champagne and Cognac.

There were Jews in Úštěk?

A big part of the town was actually a Jewish ghetto between the 15th and 19th centuries. However, the first Jews were documented here as early as in the 13th Century. The kehilah here emerged due to Úštěk’s advantageous position on the commerical road. The Jews never reached more than a quarter of the local population. Nevertheless there were several hundred souls during the town’s peak in the Baroque era. 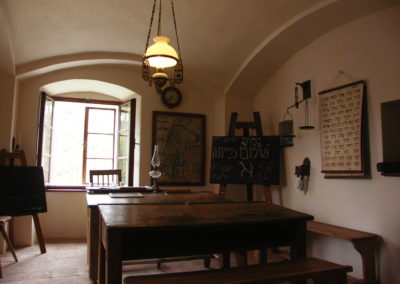 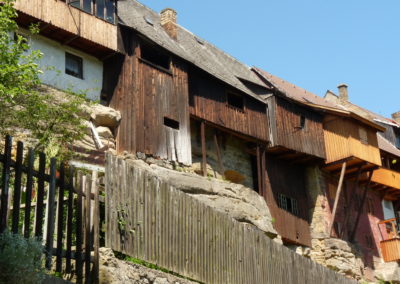 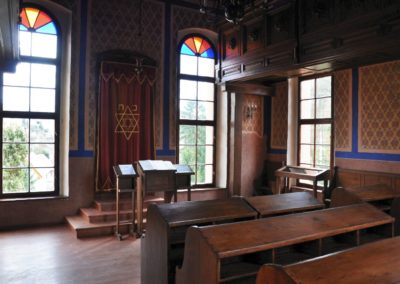 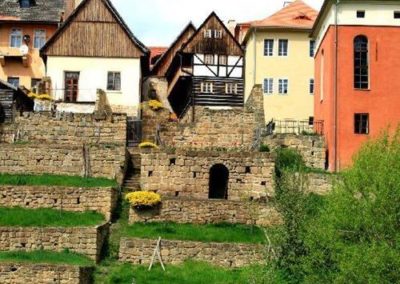 Unlike elsewehere on the Czech-German borderline, where most monuments resembling Jewish presence were destroyed by the Nazis during and after the Kristallnacht, in Úštěk, all structures were preserved. This includes a small building combining a synagogue, cheder and a village Jewish teacher’s home.

The building is a unique example of a strictly baroque, quadrate building, looming proudly on the slope and poses as a valuable legacy of the life of medieval rural Jews in the area. Next door to the synagogue stands a three-story high beit midrash erected in the 19th century, a Jewish school, town hall and mikvah, which has been recently restored by the Czech Jewish Federation to house an exhibition focusing on Jewish education in Bohemia and Moravia. Across the little brook that flows peacefully a few steps away from the silent former shtetl, is a well hidden Jewish cemetery. It has about a hundred and twenty tombstones, some of which date back to the 18th Century.

Úštěk presents a very unique yet desired stop to brighten up your day if you are between Prague and Dresden, and especially if you have visited the nearby former concentration camp of Theresienstadt. If you are planning to visit more towns after our kosher river cruise in the Danube this 2018, we are glad to give you some advice and suggestions.