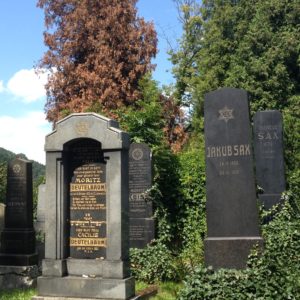 Kosher River Cruises has a number of kosher cruises in Europe, each with a variety of destinations that focus on exploring Jewish history. One of the stops in our Danube river cruise is the Jewish Cemetery in Vsetín, located in the Zlínský region of the Czech Republic.

The Jewish cemetery in Vsetín is relatively small and, compared to other Jewish burial grounds in Moravia, does not seem significant at first glance. One could say that it is similar to the importance and size of the former Jewish community in Vsetín, which originated only after the revolutions in 1848. Moravia is a historical region in the Czech Republic and one of the Czech lands, together with Bohemia and Czech Silesia.

The cemetery is located on the right bank of the Bečva river, a left tributary of the river Morava. It is found northwest at the foot of the Jabloňová hill, next to the Christian communal cemetery. It is just a few steps from the Upper Corps’ Evangelical Church and has a land area of 900 square meters.

The cemetery was founded during the mid-19th century. About 100 people are buried there with approximately 50 tombstones. Most of them are from the second half of the 19th and the first half of the 20th century. Interned here also is the family of Czech-Israeli historian and writer Erich Dow Kulka, one of the many notable Jewish figures that you may learn more about during the cruise.

Who was Erich Dow Kulka?

Born in the village of Vsetin, Moravia on February 18, 1911, Erich Schon was the son of Malvina and Siegbert Schon. After World War II, he changed his last name to Kulka, the last name of his first wife, Elly, who did not survive the Holocaust. He passed away on in Jerusalem on July 12, 1995.

The series of the arrests on Erich Kulka began in July 1939, with an arrest made by the Gestapo in Brno. He was eventually imprisoned in the Dachau, Sachsenhausen and Neuengamme camps until November 1942. He was then transferred to Auschwitz. Given the number 73043, Kulka was sent to work on the maintenance and repair of machinery and machines in Auschwitz II (Birkenau). In January 1945, during the evacuation of the inmates by train from Auschwitz and the approach of the Red Army, Erich and his son Otto reached the Moravská Ostrava station and escaped. They found hiding places in the homes of Czech friends in the area.

Erich Kulka’s experiences during the war are described in his book, “From Suffering to Resistance”.

Immediately after the end of the war, Erich Kulka and his friend Ota Kraus wrote “Death Factory”, the first book about Auschwitz-Birkenau. It was first published in the Czech language in 1946, and then soon translated into many languages. It is widely recognized as a classic documentary book about Auschwitz.

Kulka was also a witness at trials against war criminals conducted in Poland from 1946 to 1947. In 1956, he donated photographs to the Auschwitz-Birkenau State Museum. During the 1960s, Kulka continued to testify at the trials of SS personnel for their crimes in Auschwitz.

After the Soviet occupation of Czechoslovakia in 1968, Erich Kulka made aliyah to Israel and continued his research activity at Hebrew University and at Yad Vashem. He contributed his books to the Beit Terezin Library at Givat Haim (Ihud) and the Yad Vashem archives.

In addition, the cemetery also has the buried members from the families:

Some of the oldest gravestones are Hebrew only, while the vast majority are German-Hebrews, the “lowest” of Czechs.

Before the entrance to the cemetery, there is a memorial plaque on the wall of a communal cemetery. It is dedicated to the Jews of Vsetín and the surrounding areas who died in the Holocaust. This was due to Vsetín native and Auschwitz survivor, Erich Kulka.

For more information on the rest of our Danube tour, please check our website at https://kosherrivercruise.com/danube-river-cruise-2018