The Castle of Karlštejn

Karlštejn, also known as Karlův Týn in older sources and as Karlstein in German, is a large 14th century castle located in the Beroun district, about 30 km southwest of Prague. It dominates the National Protected Landscape Area of Český Kras. Looming proudly over the hills surrounding the valley of the river Berounka, Karlštejn is one of the best preserved medieval castles of Europe. It is also one of the most visited tourist sites outside Prague.

The castle was founded in 1348 as a private residence of Bohemian King Charles IV. Only after Charles was crowned Holy Roman Emperor in Rome in 1355 was the purpose of the castle changed. It was then used as a treasure trove for the preservation of the Holy Roman Empire’s Coronation Jewels and a set of relics of saints. 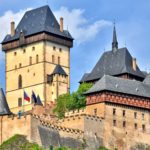 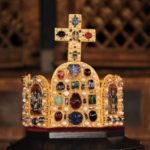 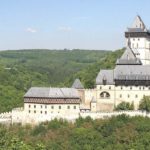 At present, the castle is an important national cultural monument and one of the most visited castles in the Czech Republic. Close to a quarter of a million people visit each year. The decoration in the most precious space of the castle – the Chapel of the Holy Cross in the Great Tower – is an example of advanced Gothic artistry. The castle is owned by the Czech Republic, managed by the National Monument Institute and open to the public.

The Holy Roman Empire or medieval Germany did not represent just one of the political powers of the old continent during the reign of Charles IV. It was a political entity that perceived itself as the heir of the ancient Roman Empire’s traditions and the protector of all Western Christiandom. The role of its sovereign thus had a significant religious dimension. 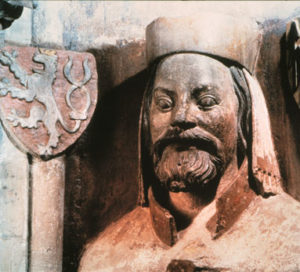 An example of this may be the New Town of Prague, which Charles IV established not merely to become one of the most imprtant and biggest towns in Europe of its time but also as a religious center of Europe. The vision of a “New Jerusalem” was reflected in the location of the New Town churches, which from the bird’s eye view create a shape of a cross.

When the papal representative in St. Peter’s Basilica of Rome laid the imperial crown on Charles‘ head in 1355, he made him the highest secular authority of all European Christians. And Charles IV decided to honor the sacred golden crown in an unprecedented way. Every year, he would exhibit the crown at the New Town’s Cattle Market (today the Charles‘ Square) – and as its opulent safe, he ordered that the lavish chapel in the Karlštejn Castle would be built.

The Chapel that would safekeep the Coronation Jewels was designed as the most sacred place of the Holy Roman Empire. The fifteen-meter-long and nine-meter wide chapel is decorated with golden cross-vaults with cosmic motifs. The wall cladding is made of precious stones from the Bohemian hills. 129 panel paintings of saints, popes and monarchs, created by the emperor’s court painter Master Theodorik, decorate the space–the finest example of European art in the High Gothic era. The Charles‘ Heavenly Army, reminiscent of the altar in Orthodox Churches, gives the entire chapel an unusual Byzantine and Oriental character, which is virtually unprecedented anywhere in Western and Central Europe. 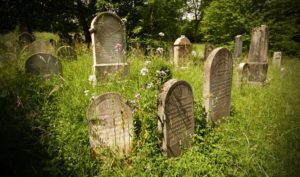 The Castle is worth visiting when in Prague and having a day extra in your itinerary – but be ready to climb a steep road to the castle hill first. The destination is can be reached by car or by train from Prague’s Main Railroad Statio in an approximately 30-minute ride. Nearby is the famous crystal factory of Nižbor and a well-hidden but charming old Jewish cemetery in the village of Mořina. If you are going on a kosher tour with us around the Jewish and non-Jewish gems that Central Europe has to offer, Karlštejn is one landmark that you shouldn’t miss!