Persisting Against the Inquisition 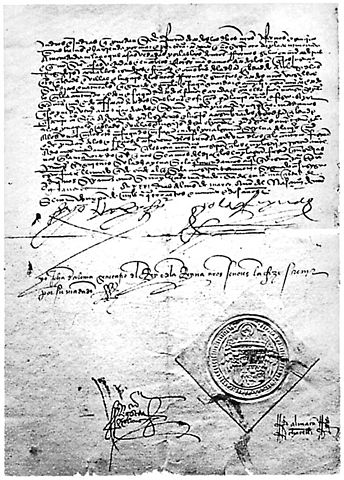 Photo Credit: en.wikipedia.org/wiki/Alhambra_Decree | A signed copy of the Edict of Expulsion

Kosher touring through Europe, particularly through the Iberian Peninsula, is never complete without exploring the rich, in-depth history of the Jewish peoples who called Portugal and Spain home.

After the overthrowing of the Visigoths by the Umayyads, the Jews of the Iberian Peninsula experienced a golden age, sadly cut short by the gradual decline of tolerance among the ruling peoples, Muslim and Christian. This would culminate in the Alhambra Decree, which called for the expulsion of all Jews in Spain in 1492 by order of King Ferdinand and Queen Isabella.

One of the most vicious forms of organized persecution against the Jews was the Inquisition. In the troubling time that this campaign of terror swept Iberia, the Jews of Portugal persisted.

From Rome to Iberia

The Inquisition was first established in Rome to root out heretics of the Catholic Church, particularly the Cathars, a Christian sect that was challenging the Church’s authority. Their measures were quite extreme, using torture to force confessions from their targets. This barbarism against enemies of the church was used to the advantage of the Spanish monarchs.

In 1478, Pope Sixtus IV was convinced to authorize the establishment of the Spanish Inquisition, which was to “deal with” the issue of non-Christians in Spain, particularly Jews or Jewish converts (conversos). King Ferdinand and Queen Isabella would use the Inquisition to consolidate their power, using the Inquisition to centralize their authority in the region.

In the Midst of Suspicion

In 1492, the Alhambra Decree forced many Jews to flee Spain. While Portugal had its own expulsion of Jews, many stayed in Iberia and became conversos, Jewish converts who nonetheless practiced Jewish rituals. Other Jews hid their Judaism but publicly professed being Christian. Unfortunately, in 1536, the Portuguese Inquisition was established, targeting conversos whom they suspected were still practicing Jewish beliefs.

The alheira, a type of non-pork sausage in Portugal, was developed by Jews to draw suspicion away from themselves, hanging them outside their houses to make it seem like they ate pork in the household. The Belmonte Jews took it a step further, maintaining their Jewish practices in secret for hundreds of years until Jewish mining engineer Samuel Schwarz discovered them in the 20th Century.

On March 31, the Portuguese Inquisition was disbanded. Just recently, the Portuguese parliament declared that this day would be commemorated to remember the Inquisition and its effects on the Jews of Portugal. Remembering the past is one way to pave for a better future, and exploring history is one of our kosher cruises’ specialties. In spite of persecution and conversion, the historical conversos kept their Jewish culture alive.