Kosher River Cruise Here at , we are avid travellers dedicated to kosher travel, hidden gems, true academic education and – first and foremost – luxury. This means that you do not need necessarily to come with us in order to be able to travel—although nothing compares to actually journeying with us. We are bringing you the best of kosher travel in world’s premier locations. Today, we will také a look at the gems of Northern Italy.

The City Of Venice

We will start our virtual tour in Venice, the ancient capital of the North Italian region of Veneto. Its historic core lies on islands of a shallow lagoon while the newer parts of the city were built on a vast bank. Once a maritime and commercial power and a center of glassmaking, Venice was and still is a city of great historical, cultural, social and administrative significance.

In the Middle Ages, Venice was the center of the Republic of Venice. Today it is the center of its region and has a rich cultural life. Venice is protected by UNESCO as a World Heritage Site. Every year, almost 25 million tourists from around the world visit the so-called “floating city“, making it one of the most visited cities in the world! Due to its significant Jewish heritage, the city is a destination for Jewish travelers.

Venice is full of historic cultural and artistic monuments. Some of the oldest buildings are the Basilica of St. Marco and the medieval Ducal Palace. There are the Gothic churches of Santa Maria dei Frari and Santi Giovanni e Paolo and the Renaissance buildings Bibliotheca Marciana (Sansovino) and the Church of San Giorgio Maggiore (A. Palladio). And there is also the Baroque church of Santa Maria della Salute, St. Mark’s Square, the Grand Canal, and other city districts with historical and artistic treasures with even more masterpieces inside.

Venice also has one of the most important European Jewish communities. The famous Jewish Quarter in the Cannaregio gave the world the word “Ghetto“ (meaning “foundry“ in Venetian) and is the epicenter of kosher travel in the city.

Historically, Venice always belonged to the maritime and trading power in the Eastern Mediterranean and was always in contact with foreign cultures. It was one of the few states that tolerated the Jews. After the mass expulsion of the Jews from Spain in 1492 and Portugal in 1497, many of them settled here. They were soon followed by Jews from Germany, Bohemia, Poland, and Austria.

At the beginning of the 16th century, anti-Semitism was at its pinnacle, resulting in the Jews of Venice being ordered by the Doge to move out of the city in 1516. They were assigned to a small neglected island called Ghetto Nuovo (New Foundry). The word “Ghetto” was created by the Yiddish-speaking Ashkenazi Jews pronouncing the word. Venetian soldiers guarded the perimeter of the Ghetto on boats, closing the gates every evening.

Later, Jewish residents were allowed to expand to two other enclaves, creating “Ghetto Vecchio” and “Ghetto Nuovissima”. over 5,000 people lived here in a very small area and very crowded neighborhoods which were accessible only via bridges. Five synagogues were established, as well as a number of yeshivot and printing houses.

The Jewish printing press became world-famous. Rabbis Meir Katzenellenbogen and Leon of Modena are amongst the finest Jewish scholars and personalities associated with Venice. Jews of Venice were only granted full civic rights in 1866 after the reunification of the Italian Republic. 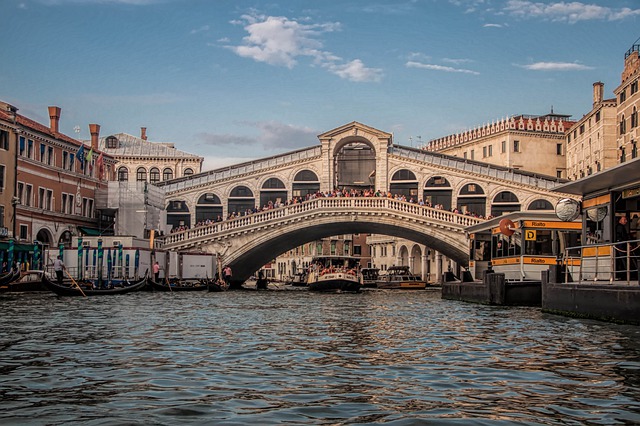 Nowadays, Jewish Venice is one of the most famous Jewish quarters of the world, proudly competing with the fame of those in Prague, Paris or Cracow. The city still boasts five historic synagogues, a kindergarten, school, yeshiva, Jewish Museum and kosher restaurants serving the Venetian Jewish speciality–the “Dolci Ebraici“ sweets. If you want an unforgettable Jewish vacation, you should not miss the opportunity to com with us to Venice!

But that’s not all there is to Northern Italy! Shall we move on to the next must-visit Jewish destination? Check the second part of this article: Part 2: Learning Northen Italy‘s Jewish Heritage With Kosher Tours