From Ferrara: The Consolation for the Tribulations of Israel

Hope is a concept that characterized many stories pertaining to the Jewish people throughout the centuries. Despite persecution and hardship, there was always a steadfast sense of providence, a promise for a better tomorrow. Our Jewish trips through Portugal and parts of Spain explored places of perseverance, places that flourished and thrived in spite of the odds.

However, one segment of history that does characterize these visits through Iberia was the 1492 Expulsion, where the Jews of Portugal and Spain were either scattered, forced to hide their Jewish status via pretending to convert, or nominally converting while still practicing Jewish activities. Two centuries later, when the scattered Jews and Crypto-Jews settled in other places, a poet and historian wrote a dynamic work in verse that reflected both the hardship of the Jewish people, along with the reassurance that despite everything, G-d did not forget them. 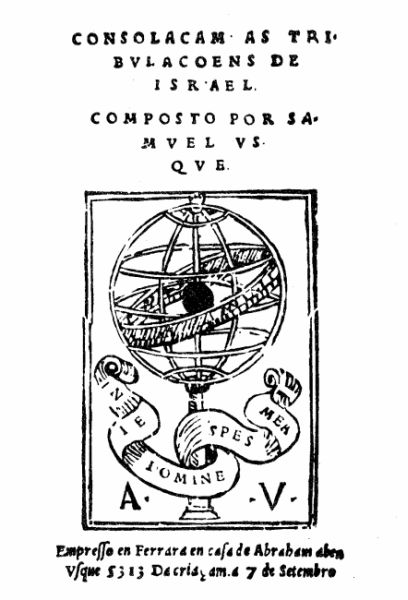 The Consolaçam às Tribulaçõens de Israel, or “ The Consolation for the Tribulations of Israel” was written by Samuel Usque, a Jewish figure who lived in Ferrara, Italy in the 16th century. Not much is known about Samuel Usque, although his surname connotes a certain sense of prestige, considering that he shares it with Solomon and Abraham Usque, two notable Jews who were well-regarded for their own contributions to Jewish literature and culture.

What is known about Samuel was that he was well-versed in the art of language and poetry, writing a gripping prose poem that told the sorrows of the Jewish people via the symbolic device of three shepherds, named after Jacob, Zechariah, and Nahum. His writings revealed an in-depth look into the happenings of that era, recounted with a familiarity that suggests personal experience from Usque’s part. The poem concludes with a declaration that G-d still holds His people dear, against all odds.

A Declaration of Hope for the Future

Some of our previous Jewish cruises passed through Italy, and one of its cities, Ferrara, was known for its rich Jewish history. It was in Ferrara that Samuel Usque wrote his masterpiece, a masterful work of literature in both Jewish and Portugese history.

Interestingly enough, Ferrara was a place of relative safety for Jews during the 16th century, one of the few places that Crypto-Jews could possibly reclaim their hidden faith. Samuel Usque’s work was dedicated to Dona Gracia Nasi, and like her, The Consolation for the Tribulations of Israel sought to comfort and give hope to the scattered Crypto-Jews of Europe. In the modern day, it is also known as a rich source of Jewish history and poetic talent, truly a gift from the past to future generations.