From a Letter of Correspondence in Khazaria

The documents of Jewish history shed light onto the norms, customs and cultures of the places that they were written in, from the papers found in the Cave of Letters to the fascinating artwork and context of the Bird’s Head Haggadah. Some of our Kosher touring expeditions visit locales described in such historical works and documents.

One such locale is Iberia, where the Golden Age of Spanish Jewry took place. Near the end of that period, a Jewish scholar and foreign secretary named Hasdai ibn Shaprut was curious about reports of Jews living in Khazaria. This would eventually lead to what would be known as the Khazar Correspondence, written between Hasdai and the alleged King Joseph of Khazaria. 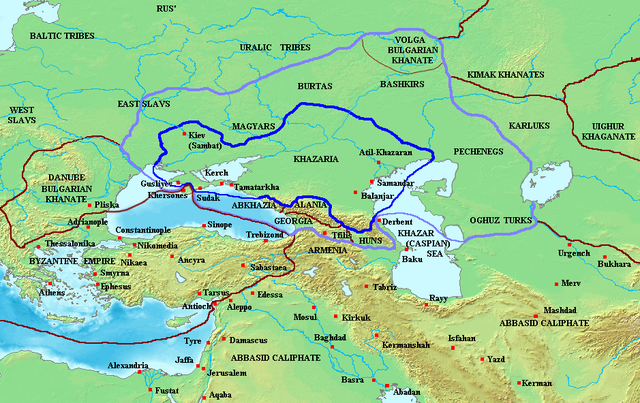 Who were the Khazars of Khazaria?

The Khazars were a nomadic Turkic people who dwelled in a large swathe of land in what would now be known as Ukraine and parts of Russia, back in the 10th Century. Khazaria (their region of influence) lay in between the Byzantine Empire and the Umayyad Caliphate, making it a buffer state between two powerful regions. It was said that a number of Khazars converted, which corresponds with the story of the Khazar King Bulan of the 8th Century, who was said to have converted to Judaism after a royal debate between a Jew, a Christian and Muslim. They were excellent traders during the Middle Ages, but their influence and culture faded away around the 12th Century.

Was There a Jewish King in Khazaria?

While it is believed that a number of Khazarian royalty did convert to Judaism, it is most likely that the Khazar Correspondence itself was forged, due to the prevalence of such forgeries at that time. Hasdai’s representatives to Khazaria (whom he sent to look for the alleged Jewish communities there) were barred from going to the region and were stuck in Constantinople, preventing his correspondence from ever reaching a possible king in the region.

While there might not have been a King Joseph in Khazaria, the history of such Jewish correspondence across Europe is still quite fascinating. The story of King Bulan, in particular, could have inspired Judah Halevi’s famous work The Kuzari. The growth and spread of such influences create an interesting portrait of the past that we have not yet seen before. We hope that our future kosher holiday through Iberia can shed more light into these interesting anecdotes of Jewish history.