After the Alhambra Decree: The Aftermath of Jewish Expulsion in the Iberian Peninsula

While kosher touring through the Iberian Peninsula, one must consider the Jewish heritage that lives on in the nations of Portugal and Spain. Our Douro River Cruise in 2020 will visit historical destinations in Portugal, such as the Kadoorie Synagogue of Porto, along with a brief visit to the university city of Salamanca, Spain. In times of antiquity, the Jews of the Iberian Peninsula lived in relative safety and security, providing essential services to the Christians and Muslims that lived therein. While persecution was always an ever-looming threat, it wasn’t until 1492 that the Jews of the Iberian Peninsula experienced an all-encompassing threat to their lives; the Alhambra Decree, or the Spanish Expulsion of Jews. 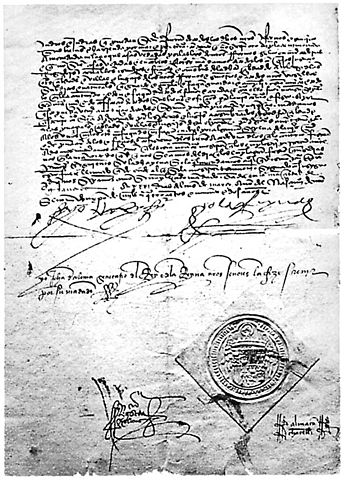 A signed copy of the Edict of Expulsion
Photo Credit: en.wikipedia.org/wiki/Alhambra_Decree

In the late 15th Century, the newly-founded Spain was in the grip of the Inquisition, a politically-motivated yet religion-driven institution headed by the vicious Tomas de Torquemada, its first grand inquisitor. By his urging, the monarchs Ferdinand II and Isabella I issued the Alhambra Decree, which declared that all Jews were to be expelled from Spanish territory (namely, the territories of Castille and Aragon), or else be baptized and abandon their faith. The two monarchs had already concluded the Reconquista with their conquest of Granada, and to solidify their power base, they expelled possible threats to their societal order. Such were the monarch’s rationale, the plight of their non-Christian subjects expendable in the grand scheme of things.

Effects of the Decree

The Jews in Spanish territory had to quickly flee, lest they be forcibly converted or killed. Some wealthy Jews fled to neighboring Portugal, where they were quickly taken advantage of by King John II. His successor, Manuel the Great, was more lenient, yet this leniency did not prevent him from expelling them once more when Isabella, the daughter of Ferdinand II and Isabella of Aragon, told him that Jewish expulsion was the precedent for their marriage. Bayezid II “The Just” of the Ottoman Empire welcomed Jewish refugees with open arms, rebuking Ferdinand for impoverishing his own lands of wise and diligent people. The Jews that could not flee, however, were either enslaved, forcibly converted, or went into hiding, masking their faith and becoming the Crypto-Jews of the Iberian Peninsula.

The scattering of Jewish heritage was a tragedy. The unjust decree of Spain’s monarchs was officially overturned in 1968, while in the modern-day, the Spanish government is offering citizenship for the descendants of the Crypto-Jews, to amend centuries of persecution. Jewish trips to Portugal and Spain would not be complete without ruminating on this cataclysmic event in Sephardic Jewish history, and of the persistence, the Iberian Jews showed in the face of such oppression.