In the post 711 era of Iberia, there were many great contributors to Jewish art, philosophy and theological thought, a flourishing era of knowledge and relative prosperity. The wealth of Jewish heritage in Iberia could even explain the number of kosher resorts in the peninsula, places where one can celebrate the good things of the past and the great events of the present. Traveling can really enrich one’s growth as an individual, which is why certain historical poets and scholars wandered far when they composed their great writings. Among the traveling thinkers was Abraham Ibn Ezra, whose wanderings contributed to his drive to make lasting works.

From Tudela to the Pentateuch 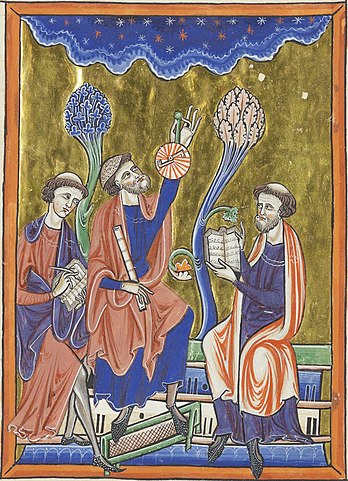 An illustration of Ibn Ezra (center) making use of an astrolabe. | (c) en.wikipedia.org/wiki/Abraham_ibn_Ezra

Abraham Ibn Ezra was born near the end of the Golden Age of Spanish Jewry, in the Muslim-ruled city of Tudela in Navarre. The exact details of his early life are scarce, like many scholars around his time. It is known that he was good friends with Judah Halevi, whom we covered in a previous article. Abraham ibn Ezra also had a wife and several children, but most of them perished and one, Isaac, converted to Islam. This may have been the catalyst for his travels, leaving Spain to travel to as far as England and Baghdad, one of the biggest cities in the Muslim world. Along his journeys, he wrote secular and theological poems, while also composing his biblical commentaries, particularly the Five Books of Moses. His musings and writings contained fascinating treatises regarding certain passages, such as his argument that the physical world was not born out of nothing (ex nihilo), but instead from preexisting matter. He would write works such as Sefer Ha-Shem, regarding the names of G-d, Tzakhot, a book on grammar and meter, and Sefer ha-Yashar, his commentary of the Torah as a whole. His travels influenced his writings, and his writings influenced his peers, such as Judah Halevi. The journeys that he took shaped his worldview and the things that he set down on paper for future generations.

Like Abraham ibn Ezra, our own Kosher Europe Tours traveled to locales for the sake of knowledge. However, individually we still have much to go if we want to walk the same path as the scholars of old. From matters of faith to matters of poetry, from grammar to astrology to Biblical commentary, Abraham ibn Ezra excelled. Physically, he walked further than Tudela, but his posthumous influence reached places even further than Italy, Baghdad, France, and England.