A Brief History of Vinohrady Synagogue 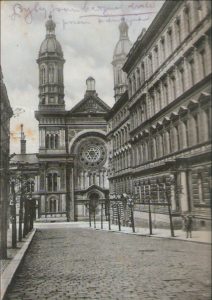 A fast-growing city, the Královské Vinohrady became the home of many Jewish families in the second half of the 19th century. In the last decade of the 19th century, the Jewish citizens in Vinohrady numbered more than three and a half thousand and continued to rise sharply. In 1921, the Jewish population reached 5,732, making it one of the largest Jewish communities in Czechoslovakia. The actual number of Jews living in Vinohrady was still far higher, however. Many were not registered in the Jewish community, not practicing, baptized, children from mixed marriages, etc.

In 1881 he was on the King. Vinohrady established an association for the creation of the Temple of Israel. An independent Jewish Israeli community was founded in 1883 at Královské Vinohrady. The construction project of the temple was entrusted in 1894 to the Viennese architect of the synagogue, Wilhelm Stiassny, who also planned the Jubilee Synagogue in Prague.

The construction went on for the next two years, between 1895 and 1896. On High Feast 5657, in September 1896, the synagogue was opened with the participation of many distinguished guests. The celebratory speech was presented by Rabbi Heřman Kohn. The Vinohrady rabbi Gustav Weiner issued a prayer for this occasion, which he translated into Czech.

The synagogue was built in the Neo-Renaissance style with Moorish elements. The structure was three-nave, basilic type, with wide female galleries on column arcades and an outer gallery around the building. Above the main façade facing the Sázavská Street was a mighty rosette window with David’s star in the middle. The Ten Commandments were on the top of the tympanum and the false portico. There were two tall, octagonal towers topped by onion-shaped domes with lanterns. The real entrance into the synagogue led to two passages to the Rabbi’s house and the Jewish schools at the side of the building.

The interior was cladded with multi-colored marble and colorful stained glass with Old Testament motifs. The seats were carved from wood, and had a capacity of 2,000. The size of the synagogue was comparable with the church of St. Ludmila near the Peace Square, and the Great Synagogue in Pilsen. The building cost 800,000 gold to build.

The temple also had organ and a choir. Synagogue Rabbi Gustav Weiner, a teacher of religion and translator, published the “Czech Hagaddah”. As a synagogue and community center, the Vinohrady synagogue served until the German occupation. During that time, it was transformed into a warehouse where the furniture seized by deported Jews was stored, like many other Jewish buildings.

During the raid on February 14, 1945, the synagogue was hit. The Germans, who prevented the fire from being extinguished, are partly to blame for the extent of the damage. Even though the damage was still repairable, the Communist regime did not want to preserve the building. They disregarded the protests of the Jewish community and had it pulled down. 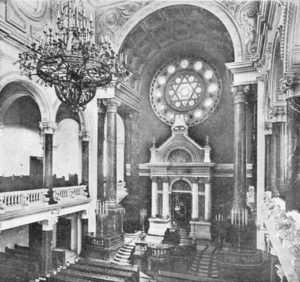 In the lot now stands Sazavska’s primary school, which opened on September 1, 1961. A commemorative plaque was placed on the left column of the school entrance. According to researcher M. Šmok, only a few items have been preserved: original tiles from the synagogue, several original prayer books, and a few memoirs of survivors of the Holocaust. Though the original building no longer stands, the legacy of the synagogue lives on.

The history of the Jews in the Czech Republic is rich, which makes it an ideal place for kosher tours. If you are interested in joining a cruise in the Danube river and learn more about our people’s heritage, Kosher River Cruises has a scheduled tour this coming 2018.

For more information, visit our page at https://kosherrivercruise.com/danube-river-cruise-2018