The Palace in Phnom Penh

The Indochinese Peninsula, also known as mainland Southeast Asia, is nourished by the bountiful waterway of the Mekong River. Our Glatt Kosher Tours through this culturally-rich region are always a treat, and riding on a luxurious riverboat while gazing at the lush riverside landscapes of Vietnam and Cambodia is an unforgettable experience. Hundreds of years ago, the Mekong River facilitated the establishment of great civilizations and enduring empires, from Funan to Cham to Angkor. These predecessors to Mainland Southeast Asia’s nations built many enduring monuments, such as the Angkor Wat of Cambodia, a sprawling Khmer temple complex located in the Mekong Delta. One of the more recent Cambodian travel destinations is the Royal Palace in Phnom Penh, built in the reign of King Norodom. 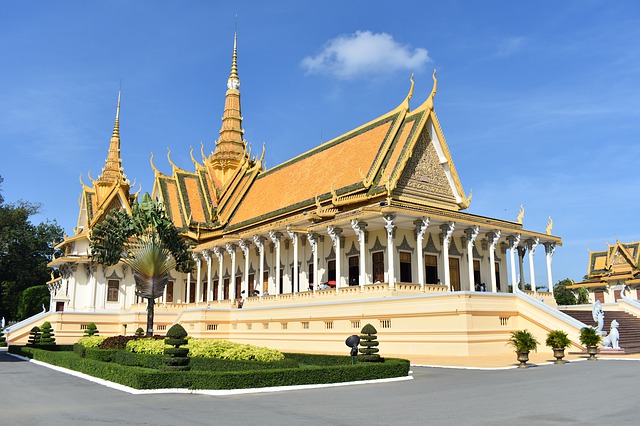 Atop the Crystal Citadel

The Capital of Cambodia changed locations throughout the centuries. When Angkor declined in the 15th Century, the capital of Khmer power moved to where Phnom Penh would be located. However, the capital would move a few more times between the 15th and 19th centuries. In 1813, the Banteay Kev, or the “Crystal Citadel ”, was established in Phnom Penh by King Ang Chan, a place of refuge that would promptly get burned down twenty years later. When the capital was moved back to Phnom Penh, the Royal Palace was built over the where the Crystal Citadel once stood.

The Royal Palace was built in King Norodom’s reign after Cambodia became a French Protectorate. When the Palace was being constructed (under the architectural guidance of Neak Oknha Tep Nimith Mak), it incorporated both Khmer designs and European-inspired facets, such as the Napoleon Pavillion. Over the years, new buildings were created and old buildings were demolished. King Sisowath, in particular, contributed to the renovation and replacement of several palatial locations, such as the Throne Hall. The Khemarin Palace was also borne out of another Cambodian monarch’s decision (King Monivong, to be precise), which is now the current royal residence.

During the Khmer Rouge, when countless Cambodian innocents were slaughtered across the country, the Royal Palace was used to confine the royal family. When the turmoil that afflicted Cambodia passed, the King of Cambodia’s role became a primary ceremonial one, which does nothing to lessen his cultural presence in the consciousness of Cambodia’s citizens. Today, the Royal Palace is a shining monument to Khmer legacy and is one of our travel destinations on our Mekong Glatt Kosher Cruise.