The Mystery of An Ancient Haggadah

To read about one’s ancestors is almost like a kosher touring experience in itself, a journey through hundreds of years of trials, triumphs and achievements across history. In these trying times of global pandemics and localized quarantines, the simple act of reading or listening about history can help contextualize the present.

The Passover Seder is one such opportunity to reveal the stories of the past, which can help us get through the present and prepare for the future. Various haggadahs for Seder have been created across the centuries, from the widely-distributed Maxwell House haggadahs to ancient illuminated manuscripts that date back to the Middle Ages. Some of these ancient haggadahs are windows into the time period that they were made in, and like history, there is plenty of mystery about some of their designs. Take the Bird’s Head Haggadah, for instance. 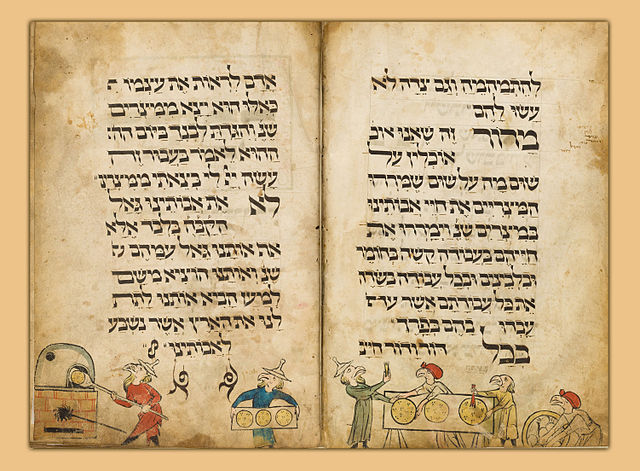 What is the Bird’s Head Haggadah?

This Haggadah is one of the oldest illuminated manuscripts of its kind, an Ashkenazi work first written in 14th Century Germany, in the upper Rhine where we conducted a previous Jewish cruise. It was apparently scribed by someone named Menahem, and depicts various Jewish historical and cultural events, such as the parting of the Red Sea, the making of matzah bread, the falling of manna from the sky, and so on.

This haggadah is known as such because within its manuscript, the depictions of Jewish characters are that large, bird-like beings, with tufts of hair and traditional Jewish hats. In contrast, the depiction of non-Jewish individuals within the Bird’s Head Haggadah are that of faceless beings (human and angel), with a few individuals having features drawn onto them by later owners.

What is with the Bird’s Heads?

According to Professor Marc Michael Epstein, the depictions of Jews with bird heads actually depict Jews as griffins, mythical creatures that combine lion and eagle features. The griffin was considered to be a symbol of bravery and heroism, and combines the features of two noble animals. This haggadah was created in a time and place where the idea of drawing human figures was considered taboo or at least discouraged, so the usage of griffons to depict Jews could be considered as a way to circumvent that restriction, while also symbolically depicting the Jewish way of life as something noble. This historic haggadah is currently in the Israel Museum of Jerusalem, where it continues to provide glimpses into the culture and mindset of Jewish communities from the past ages.