A tournament for Pesach

My proposition is that you should only have matzo kleis at Pesach.

“I saw once more…the soup with dreamily swimming dumplings—and my soul melted like the notes of an enamoured nightingale,” wrote Heinrich Heine in” The Rabbi of Bacherach.

As a child I always thought that the matzo balls or matza kleis we had with our chicken soup at Pesach (in fact throughout the entire year as well) came from our Dutch ancestry.

Imagine then in later life when our family tree and Wikipedia came along and proved me totally wrong.

I found out that the progenitor of our known family tree emigrated from Germany to Holland around 1670, with his descendants moving to the UK around 1860.

Then I read that Jewish cooks developed the recipe for matzo kleis—the bubbe of today’s more familiar matzoh meal-based one—so they would be able to enjoy their beloved dumplings even during Passover. Homey dumplings have been a hallmark of Central European cuisine ever since the Middle Ages; the Yiddish words, knaidl (a variant of knoedl) and kleis (which began as klosse) reveal their German ancestry. Originally made from leftover bread—and later, rolls, various flours, potatoes, cheese, and more—they were easy to convert to a kosher-for-Passover specialty using moistened matzoh. Even today, these matzoh balls, often called matza kleis, are popular among many Central European and Alsatian Jews

My family therefore kept their German tradition of kleis as well as still speaking Yiddish amongst themselves. This carried on through to my father Z’L.

To make Heinrich Heine’s “dreamily swimming dumpling,” boards of matzoh were soaked in water, squeezed dry, and then combined with other ingredients. Matzoh meal—at that time, laboriously ground by hand—was used only to thicken the batter. And sometimes ground almonds were used instead.

At the turn of the 20th century, as the entire matzoh-making process—including grinding matzoh into meal—became more mechanized and packaged matzoh meal more accessible, recipes for matzoh balls based on matzoh meal began to appear in Jewish-American cookbooks. But even in 1906, a charity-fundraising cookbook sponsored by Goodman and Sons’ Matzoh Company that includes several recipes for matzoh meal gives a single recipe for matzoh kleis.

So here is my family recipe. 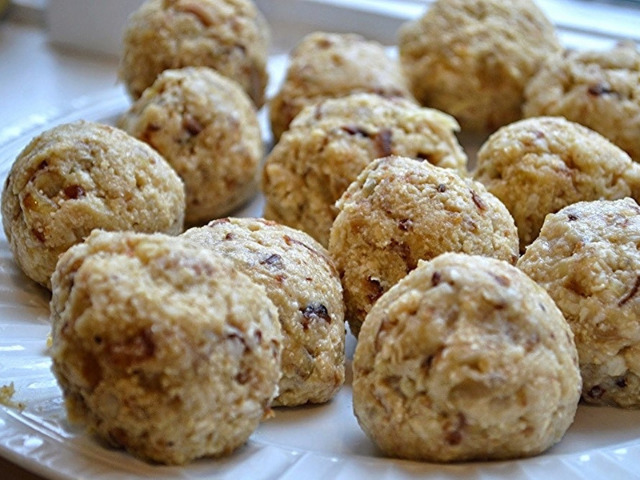 Try 4 balls in the stock if they don’t “plutz” i.e. fall to pieces, the mixture is good. If they do “plutz” add more meal until they boil successfully.

Our family eat them with chrane, yumee.

There is the following story.

When Arthur Miller first took Marilyn Monroe to meet his parents, Isadore and Augusta, in their Manhattan home. The illiterate Isadore notoriously disapproved of his son’s ambition to write, and their relationship was edgy, so Arthur was cautious about the meeting with Marilyn. But it seems they got on well. “Such a charming girl, Arthur”, said Isadore (we are told, making Isadore sound like an English Edwardian gentleman), as Marilyn finished her second bowl of matzo-ball soup. She was wearing “a simple grey skirt, a black silk blouse and no make-up” (shoes, we will never know). But when the famous guest declined a third refill, Isadore was disappointed – “You don’t like our matzo-ball soup?”. To which Marilyn supposedly responded: “Oh, I love it. But gee, isn’t there any other part of a matzo you can eat?”