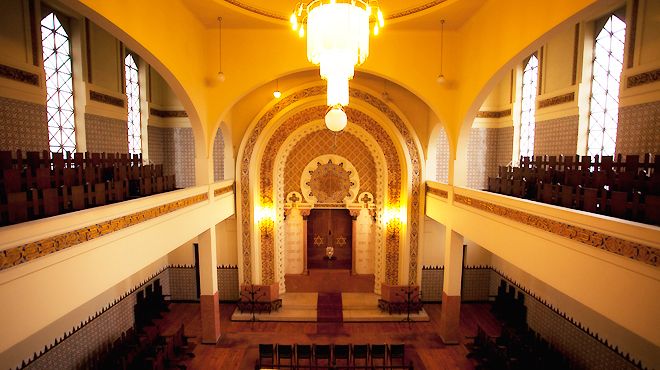 The coastal city of Porto is known for many things: its iconic Port wine, its beautiful beaches, and its historic heritage sites. While this picturesque city is a great tourist destination itself, there is a deeper layer to this city along the Douro River, one that ties it to the legacy of the Crypto-Jews of the Iberian Peninsula.

Like many locales in the Douro region, Porto is an ideal destination for kosher vacations, as the Sephardic Jews in Portugal had a significant presence here, from the old Jewish quarters near the city center to the largest synagogue in the Iberian Peninsula. This synagogue, the Kadoorie Mekor Haim, was a project by Captain Artur Carlos de Barros Basto, a Jewish military man who devoted much time and effort to returning Crypto-Jews to Judaism.

Captain Barros Basto was a Portugese WWI veteran, who discovered his hidden Jewish heritage from his dying grandfather. The discovery of his lineage inspired Barros Basto to search for other Crypto-Jews in Portugal, travelling across the countryside in search of his hidden brethren.

He helped establish synagogues in other Portugese regions, such as Braganca, and even went on to lead the local Jewish community in Porto. With generous financial assistance from Jews around the world, most notably the Kadoorie Family, the Mekor Haim (“Spring/Source of Life”) synagogue was inaugurated in 1938, a place where Porto Jews could practice their faith.

Unfortunately, Barros Basto would face several unjust accusations that left him stripped of his military honors. Despite this dishonor, he helped fleeing Holocaust refugees find shelter in Porto. The captain’s name would only be rehabilitated in the 2010s, decades after his death in 1961.

Modern-day Porto has escaped the dictatorship that held it during the early 20th century. The Kadoorie Synagogue is now a popular Jewish heritage destination, with interior tours that detail both its personal history and that of the community that established it.

As for Captain Barros Basto, the Jewish community in Porto recently funded Sefarad, a film starring the Crypto-Jews of Portugal, with him as the lead figure. On one of several kosher cruises in 2020, we will visit this historic synagogue, along with other Jewish heritage sites along the banks of the Douro River.