The scope of Kosher River Cruises’ land tours often takes us far beyond the physical and temporal borders of our travel destinations. Our previous Douro River Cruise visited various towns and cities that held remnants of Iberia’s Jewish heritage, a heritage unjustly evicted by the merciless edicts of Spain’s monarchs. The enduring legacy of these Sephardic Jews can be felt even after hundreds of centuries, echoes from across time that resonate with us as we tour their cities and visit their surviving synagogues. 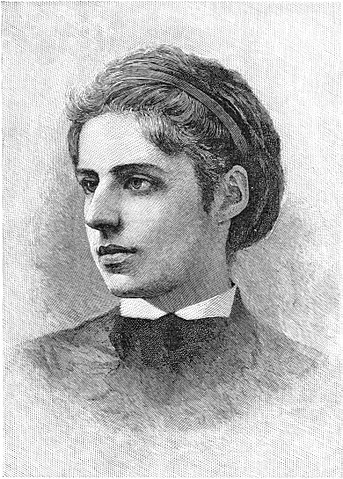 In America, one daughter of Sephardic Jews wrote something that would compliment one of the nation’s most famous landmarks. She was a woman of artistic talent, who championed the cause of Jews fleeing antisemitism in Russia. Her name is Emma Lazarus.

A Snapshot of a Life

Emma Lazarus was born in New York City in the year 1849. She was the fourth of seven children, the daughter of a wealthy sugar merchant and belonging to a wealthy elite of Sephardic Jews descending from the first Jewish settlers. As a result of this background, she received an excellent classical education, from which she developed her love of poetry. Despite her family’s relative prestige, there was always a sense of othering that she felt, a sense that she wasn’t truly welcome among her Christian peers.

Around the 1880s, she learned of the pogroms occurring in Russia, and the consequent mass immigration of Ashkenazi Jews to America, seeking to flee the bloodbath in Europe. This brought about her passion for Judaism, and for the rest of her days, she championed the cause of immigrants seeking a better home. She died in 1887, at only 38 years of age.

Emma was a skilled poet, and her first collection of poems (Poems and Translations) was praised by Ralph Waldo Emerson, who would serve as her mentor until his death in 1881.
To help raise money for the Statue of Liberty’s pedestal, Emma wrote her most famous work, “The New Colossus,” a sonnet that contextualized the symbolism of Lady Liberty, turning her into a beacon for people emigrating to America, such as the Ashkenazi Jews. Songs of a Semite, published in 1882, was a collection of her distinctively Jewish poems. Aside from her literary work, she helped establish the Hebrew Technical Institute, which helped Jewish immigrants find their footing after moving to America.

Fruits of a Long Legacy

In 1903, seven years after the Statue of Liberty was finished, a plaque was cast within the statue’s pedestal. Cast onto its surface was Emma’s iconic poem “The New Colossus,” her legacy etched into one of America’s most famous landmarks. If her circumstances had been different, if she had not cherished her Jewish ancestry, then this iconic statue might not have the same character it has today. Our Jewish trips let us remember the heritage to be found around the world. Join us as we rediscover the Sephardic Jewish legacy of the Iberian Peninsula.