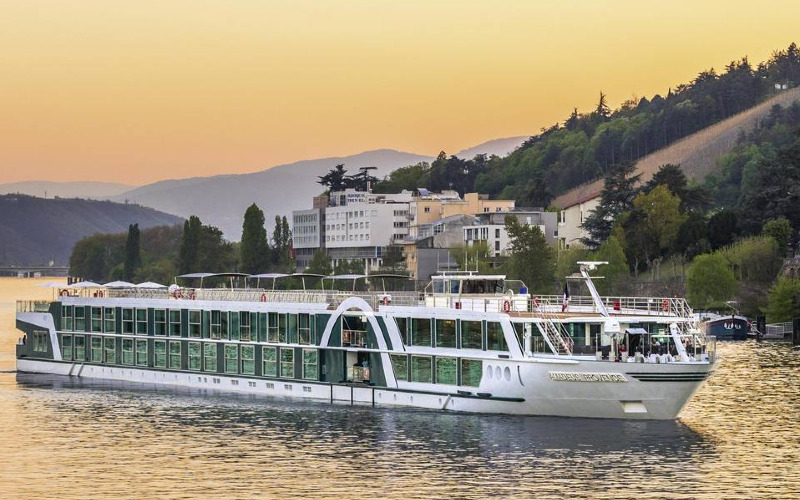 Set just above the Mediterranean, Provence is appreciated throughout the world for its lifestyle and its striking sun-drenched beauty. The azure-blue skies, natural formations, ancient heritage, chirping cicadas, lavender fields, and hilltop villages make it a holiday destination out of which dreams are made.

Jewish Provence: To the French, Provence evokes the books of Marcel Pagnol, the Occitan language, and the paintings of Vincent Van Gogh and Paul Cézanne. But it is also rich in Jewish history. Jews lived in this part of southern France in comparative peace until they were expelled in the 14th century, when the region was united with the Kingdom of France. These banished Jews found refuge in the lands ruled by the Popes of Avignon — today’s Department of the Vaucluse – in the cities of Avignon, Carpentras, l’Isle-sur-la-Sorgue, and Cavaillon. The cities became known throughout the Jewish world as the Arba Kehillot, the four communities, and the Jews who lived therein became known as des Juifs du Pape (the Pope’s Jews). The Jews of the Arba Kehillot spoke a Judeo-Provencal dialect known as shuadit and developed traditions very different from those in Jewish communities in other parts of Europe.

Come along with us as we explore the Arba Kehilot and the wonders of this region for a unique, educational and relaxing holiday down the Rhone!

Day 1 Thursday – Lyon Embarkation
You will be met at the airport in Lyon and transferred to your luxury ship where you will be welcomed by your Kosher River Cruise team. Tonight, enjoy a welcome reception, orientation, and dinner on board.

Day 2 Friday – Arles
Join your local guide for a walking tour showcasing the highlights of the city in particular the 2000-year-old Roman Amphitheatre still in use today, which was originally built to hold 20,000 spectators in the style of the Colosseum in Rome. In the afternoon experience a very special kosher winery tour and tasting.

Arles: Immortalized in the paintings of Vincent Van Gogh, Arles sits on both banks of the Rhône River. The town is replete with many Roman-era buildings and features such as the Arena, the Roman Theatre, and the Roman Baths. The town is also well-known for its festivals and fairs and is one of the few places in France where one can see bullfighting.  With over 300 days of sunshine a year Arles has been a beacon for travelers and artists for centuries. Picasso and Cezanne painted here, and of course the paintings of Van Gogh created some of his most famous works in the fields surrounding the town.

Spend a leisurely Shabbat on-board with new and old friends. Afternoon optional pre-purchased entry to The Musee d’ Arles et de la Provence Antiques which has a number of medieval tombstones with Hebrew inscriptions and a 4th century carved burial stone depicting Abraham about to slay Isaac. The Musee Arlaten also has items of Jewish interest including Provencal ritual objects, and a pocket Torah among its collection.

Day 4 Sunday – Avignon
Explore this UNESCO World Heritage Site of Avignon walking its medieval streets lined with magnificent mansions. Visit to the “Pope’s Palace”, one of the area’s cultural jewels and the famous Saint- Bénezet Bridge. In the afternoon we explore the medieval Jewish Quarter, meeting with the Jewish community at the synagogue originally built in 1221 with it final rebuild in 1848 and still used today by the Avignon Jewish community.

Avignon: Avignon stands high above the immense plains of the Rhône River Valley and is the strategic point of the whole valley. One of Provence’s cultural jewels, Avignon is an art and museum town. It is of course also famous in the French children’s song about the Saint- Bénezet Bridge. Seat of the papacy from 1309-1377 because of a conflict between the Kingdom of France and the Papacy, the Pope’s Palace is now as a UNESCO World Heritage Site. Medieval streets and magnificent mansions are part of the city’s landscape, and you will have so many museums from which to choose it will be difficult to decide which ones to see first.

The Jewish Quarter was originally northwest of the Place du Palais. In 1221, the Jewish community was relocated to an enclosed quarter in the parish of Saint-Pierre, around the Place Jerusalem. The ghetto or carriere as they are known in this part of the world, was closed off by three gates, only one of which, of which only one, the Porte Calandre, remains.

The Synagogue was built in 1221. The French Revolution ended the ghetto regulations and most of the houses were torn down in the 19th century. Rebuilt between 1765 and 1767, it was destroyed by a fire in 1845 and rebuilt in 1848 and today is still used by the Avignon Jewish community.

Day 5 Monday – Carpentras & Viviers
A Day of Jewish exploration as we visit the town of Carpentras. We explore the Carriere and the 1367 Carpentras synagogue, one of the oldest synagogues in France. It is a living testimony to the presence of the Jewish communities that were under Papal protection after one of the many expulsions from the Kingdom of France. On the lower level of the building is a mikvah and a matzo bakery. The synagogue went through a full and final restoration in 1954.

Carpentras: Carpentras was the capital of the Comtat Venaissin County in the Middle Ages. It owes its originality to the fact that it was part of the Holy Chair from the 13th to the 18th century and to the former presence of the “Pope’s Jews”, who found shelter in the town. The historic quarter harbors the 12th-century ramparts and Episcopal buildings, including the Episcopal Palace, Hôtel-Dieu, and ancient Jewish quarter.

Begun in 1367, the Carpentras synagogue is one of the oldest synagogues in France. It is a living testimony to the presence of the Jewish communities that were under Papal protection after one of the many expulsions from Kingdom of France. On the lower level of the building is a mikvah and a matzo bakery. The synagogue went through a full restoration in 1954.

Though still confined to a carriere, by the 18th Century the community’s economic situation had improved. The French Revolution brought down the walls of carriere and liberated the Jews of Provence.

Viviers: Exploring Viviers is like stepping back in time to the Middle Ages. The lower town housed tradesman and artisans, and the upper or religious town that was the seat of a bishops. The upper walled town is a warren of narrow cobbled streets with stone houses, a cathedral, and a castle terrace that offers spectacular views of the rooftops and river below.

Today will be spent with a scenic bus tour of the Ardeche Gorge; known as the “European Grand Canyon”. Tour includes a stop at a local lavender farm, factory for demonstrations and shopping its many locally produced lavender products.

The Ardèche Gorge is often referred to as the Grand Canyon of Europe, its spectacular limestone cliffs tower up to 1,000 ft above the meandering river below. The entrance to the Ardèche Gorge is through the famous Pont d’Arc near Vallon which, at 192 feet is, according to the Natural Arch and Bridge Society, “the largest natural bridge in Europe”. You will take the famous Gorge Trail, from which you can see the harmonious meanderings of the river. Beautiful viewpoints such as the Pont d’Arc and Serre de Tourre offer the greatest views onto the canyon and the river Ardèche.

Day 7 Wednesday – Lyon
Join our guides for a walking tour of Lyon, France’s third largest city, a former Roman capital positioned at the confluence of the Rhone and Saone rivers, which is steeped in history. Our tour starts with a drive to the Basilique Notre Dame de Fourviere, Lyon’s hilltop church, with stunning views over the town. Then pass by the recently re–discovered Roman amphitheater and walk through the cobbled streets of the gastronomic old town including the secret laneways. In the afternoon we explore Jewish Lyon. Records of Jews living in the city beginning in the year 39, with over 20,000 Jews living in Lyon today. We will meet with the Jewish community and explore the famous Grand Synagogue built in 1864. Our touring ends with a ceremony at the Museum of Resistance and Deportation which commemorates the French Resistance to Nazi occupation and the deportation of Jews to the camps.

Lyon: Lyon is the capital of the Rhône department in East central France. According to a medieval Jewish legend one of the three boats loaded with Jewish captives taken during the siege of Jerusalem docked at Lyon. Herod Antipas, tetrarch of Galilee, was exiled to the city by Caligula in 39 C.E. Lyon seems to have had a Jewish population in both the first and the second centuries. Little more is known about Jews in Lyon until the beginning of the ninth century when there was a large, prosperous, and powerful Jewish community in the city.

​Relations between Jews and their Christian neighbors appear to have been amicable. Jewish vintners and butchers sold their merchandise to both Jews and Christians. Jews also served as purveyors to the imperial palace. Some Jews were employed in public service, especially as collectors of imposts and taxes.

Throughout the Middle Ages the Jews reappeared on and off in Lyon sporadically as merchants at the fairs and probably also as correctors of Hebrew printing. A community gradually reestablished itself in the 17th century, consisting mainly of families from Avignon as well as from Comtat Venaissin, Alsace, and Bordeaux. In 1775, the community officially requested permission to open a cemetery. Twenty years later they were able to purchase a cemetery at La Guillotière. Nevertheless, the number of Jews remained insignificant, and there was no synagogue or permanent prayer room.

Many Jewish resistance fighters hid in the city during World War II. Subsequently, Klaus Barbie, the Butcher of Lyon, set up his operations there. On the eve of World War II, 5,000 Jews lived in Lyon, many of whom perished. After the war, many Jewish immigrants settled there, today there is a sizeable Jewish population of 20,000.  Today Lyon has more than 20 synagogues. Its most famous is the Grand Synagogue built in 1864.